Conflicting thoughts dance around his head.
He shakes them off to go earn his bread.

At the river bank he picks up his oars
And ferries people across the shore.

As he rows he feels happy
His hands and body move in perfect harmony.

He breaks into a smile
And forgets his problems for a while.

The happy customers will pay up the fare.
But the contractor will take the lion’s share.

He sighs and consoles himself
After all, his dream won’t come true by itself.

His simple heart plays its own beat
One day, he’ll have his own fleet. 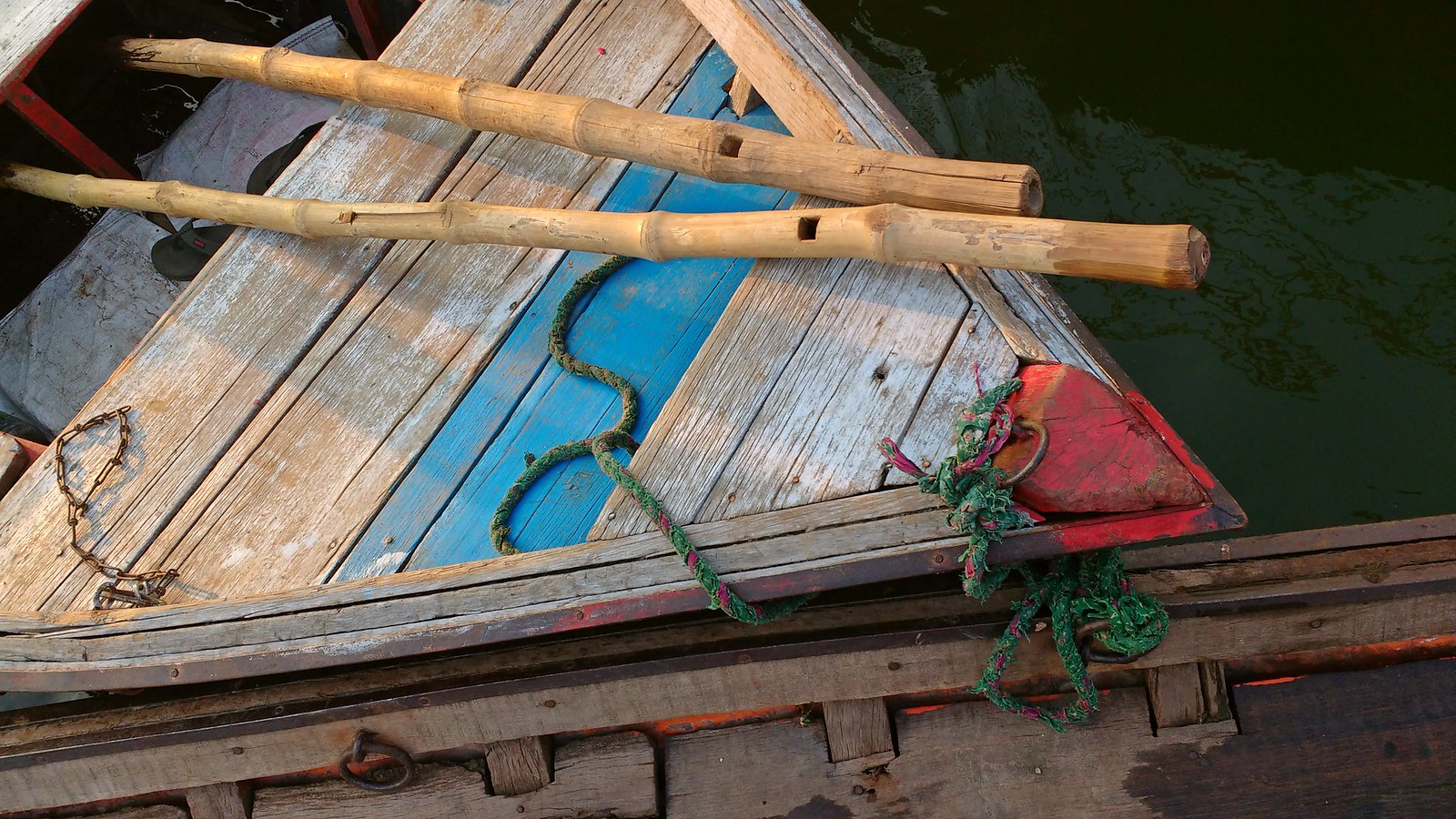 Photo taken with a Moto G3, edited with Befunky.

This is post #27 in this year’s NaBloPoMo, or as Ra calls it Nano Poblano

This morning, as we began making tea, Atul placed a piece of ginger on the kitchen counter and made an interesting observation. “This looks like a rockstar!”

The humble ginger has been rocking my life ever since I can remember.

When we were kids, every year, on Diwali (that’s Naraka Chadurdashi or choti Diwali for folks in the north), my mother would heat up sesame oil and crackle black pepper and chopped ginger. Once the oil cooled down a little, and while it was still warm, she would tell us to eat the spices and then apply the oil directly on our scalp.

Diwali signifies the onset of winter, and this little ritual was performed to avoid catching a cold in the changing season. It wasn’t the most pleasant thing to do, and we reluctantly gave in. Over time, though, we began appreciating it for its health benefits, and now, I willingly follow this practice.

Today, as the nip in the winter air pierces my skin, the comfort of ginger makes me feel warm. So I wrote a small ode to the versatile spice, that doesn’t discriminate.

The versatile ginger,
Some love to hate.
But that doesn’t affect her
She doesn’t discriminate.

She blends in well
In my tea as a spice.
And with garlic too,
She plays super nice.

She lifts me up
In bread and cookies
She’s the kick and tang
In my hot curries.

She’s the antidote
To my cold and sores
As well as a soothing balm
To my burning throat.

Ginger, there are some
Who can’t stand your sight,
But ginger, to me
You’re a rock star alright!

Here’s a picture of her, rocking her usual self.

With this week’s daily post challenge asking bloggers to experiment, we decided to play around with the picture. I wanted to add fancy stickers and hashtags, and I assumed Instagram would let me do that. So I signed up – today. Turns out, it’s Facebook app that really fulfilled the requirements. (Yes, I’m terribly ill informed about social media apps!)

Here’s what Atul dished up:

She’s so happy I made it past the half way mark!

Psst. Since I’m celebrating my first day on Instagram, can I request you all to follow me? 😉

This is post #16 in this year’s NaBloPoMo, or as Ra calls it Nano Poblano

We’re always told to think before doing anything. If possible, think twice.

But what if we don’t even know what we’re going to do? How does one think about it?

Like when we’re nervous, blurting out words without even knowing what we’re about to say next.

Like the social animal who knows just the right words to strike up a conversation without even knowing you.

Like the high ranking official on a podium who reacts to emerging situations without prior preparation.

We’ve all been in these situations. It happens in speech, as it does with other forms of expression – the artist, musician, actor, and writer within us reaches out by bypassing the neurological highway and surprising us.

Here is one of those moments when my thumbs tapped away without my knowledge:

The world spins around
Nothing makes sense
Inertia worsens this hell.
Leave. Move –
Before it’s too late
Or fall into your shell.

They say that the universe has a way of communicating with us. That the world sends messengers to guide us along the way.

Sometimes, the messanger is sitting right inside us.

When you have no time
They’ll drive you crazy.

When you least expect them
They’ll dance in your mind.

You crave to indulge them
And promise them your time.

Only, when the moment arrives
They become hard to find!

We look up –
When we yearn for rain,
Or rays of sunshine
And for a silver lining.

We look up –
When we dream,
Or think of the struggle ahead,
And when we succeed.

We look up –
Whether for strength,
Or for hope,
And in glory.

To see what other people around the world are looking up to this week, head up to the Daily Post Weekly Photo Challenge.

From established comforts
To starting anew

From being a part of one family,
To belonging to two

From the yearly hop between two cities
To a traveling spree

From figuring out two cultures
To switching between three!

From the spoilt n lazy brat
To greater responsibility

From an individual
To managing a team and a family

The image featured above is of “Lovers Meet” – the confluence of the rivers Teesta and Rangeet. The viewpoint is located somewhere between Darjeeling and Gangtok.

Early morning
As the bud opened her arms,
I tried to get close.
I wanted a picture
It cost me a few scars.
I wondered why roses have thorns
The thorny plant replied:
Perhaps you may consider
Even a thorny plant can nurture a rose.

They fluttered their long eyelashes
She looked straight in my eyes.

They had their airs and whims
She had only basic needs.

They were of high stature, exotic even
She was simple and plain.

They lived in posh houses
She was happy with the streets.

They were liked by one and all
She chose to be with me.

The world sees greatness,
But you hide and take cover.

Oh! You fickle stupid self,
Recognize thy power.

This is post #7 in this year’s NaBloPoMo, or as Ra calls it Nano Poblano

You can lie all you want.
You can hide behind your mask.
You don’t need to tell me,
And I will not ask.

You may deny it,
And say all is fine.
But it’s written on your forehead,
Across every single line.

You must be patient,
Soldier on.
Let go of your worries,
It’s time to move on.
Explore the world,
Save your memories.
Be brave, be bold,
Tell the world
All your stories.

This is post #4 in this year’s NaBloPoMo, or as Ra calls it Nano Poblano

Like most people, I read newspapers only ten months later, while I’m clipping my nails.