“I know these roads like the back of my palm!”

My cab driver replied, when I asked him if we were on the right route. The criss-crossed, perfectly planned, roads of Lutyens Delhi all looked the same to me. And their names — the names of kings and their ministers — that we struggled to memorise in our social studies class in school. It was a struggle then. And it continues to be a struggle, all these years later, to distinguish between the roads named after them.

But my cab driver had circled these roads for several years. And he knew them well. He also noticed something.

“You see these trees here?”

“Yes, that’s what I love about this part of town,” I said.

“They’re tamarind trees. And never once, have I seen flowers or fruits on them,” said the cabbie.

And his explanation was simple. It’s because the trees are surrounded by politicians.

I try not to talk about politics with cab drivers. But that comment on the tamarind trees helped me open up about my opinions, and through the rest of the journey, we continued our conversation around modern politics, agreeing with each other’s assessment of how low Indian politics was.

“You must show them music.”

We were visiting my aunt in Bengaluru. She has a lovely garden, filled with bonsais and orchids. And her betel-leaf plant, has no rival anywhere on this planet — in its appearance, and taste!

She was sharing the secrets to her green thumb. They are very sensitive, she said. And they love music. Don’t play them the same music every time. Mix it up, rock music, Bollywood, bhajans… Keep them happy, she said.

Ever since I first saw them as a little kid, when my father took us for a vacation, I have been fascinated by them. We’d picked up a couple that we found on the ground during that vacation, and I hadn’t had the joy of picking up another.

So when I saw a pine tree in the college, I was excited. But during the three years I spent there, it never bloomed.

I continued to visit the college, as part of the Alumni Association, for the next several years. Every time I visited the college, I’d look up, only to find needles. No cones.

And then, one day, I saw them. Several of them.

“This pine tree has cones in it!”

I jumped for joy, as a teacher and a couple of students looked at me. I can’t say for sure, but it’s likely, that they were amused by my childlike behaviour and my explanation. I told them:

This tree is happy! This tree is responding to the energy around it. Truth be told, when we were in college, this place was dead. No energy, and a lot of negativity. But now, it is so lively. There is so much energy around here. And now this tree has cones in it!

“This tree was planted when I joined this college,” replied the amused teacher. “It’s twenty-five years old. Back then, I didn’t think it would even survive this weather,” he added.

“So, which topic are you speaking on?”

Back in college, I went with a friend of mine, to a debate being held in another campus.

We located the room in which the debate was to be conducted, and then waited, as the participants trickled in. The room was large, the ceilings high. Perhaps, it could have comfortably seated a hundred people. Multiple doors and large windows on either side ensured there was good ventilation and ample natural light. On one side of the room, was an open passage, that overlooked a beautiful, large lawn. The other side, also had an open passage, that overlooked an atrium.

The room began filling up, one by one. There were, perhaps, thirty students, in all, when I began to feel a little uneasy.

It was early winter. There was that wonderful Delhi-winter sunshine around us. The room was large, and people, fewer than half capacity. And yet, I felt suffocated. I couldn’t understand why.

“Oh, we’re not participating. We’re just here to see,” I don’t recall which one of us replied to the participant’s question.

“Oh, no wonder you look so relaxed!” she replied.

And that’s when it struck me. That uneasy feeling wasn’t within me. It was in the air.

The collective tension was being spread by the participants, that, being an objective observer, I had experienced externally, as opposed to internally.

Plants and animals can understand human energy, better than other humans. And that’s because humans have that one ability — no, handicap — that other creatures don’t have — telling lies. We lie to others. And we lie to ourselves. And we spend a lifetime on this planet just trying to figure out the truth about ourselves. For some, that truth comes through reading, or speaking with close family and friends. For others, it comes through art. Humans invented psychology to help figure out the human mind. And science, to explain energy. And for anything that couldn’t be explained by either, there was religion.

While we are still figuring out ourselves, plants and animals can see right through us. They don’t speak our language. They don’t need to. They just sense.

We are all bundles of energy. We reflect light, and produce sound. We feed off energy. And we disseminate energy.

Vitamin D is known as the sunshine vitamin, because it is produced by the body with the help of sunlight. Sunshine, is also associated with happiness. Perhaps that is why tropical countries tend to be depicted by photographers through smiling portraits. Because even in poverty, the sunlight makes people happy. Sunlight is energy — quite literally.

I once read that looking at flowers, first thing in the morning, makes us feel good. Plants that get ample sunlight, convert the light energy into beautiful flowers. Those flowers are a manifestation of energy.

Those flowers are happy, and we feed off their energy.

And when we feel happy, we spread that energy.

All these disjointed memories, and energy that binds them, came to me after I shared a painting “A Ray of Hope”.

We’re all bundles of energy. We helped create the current pandemic. And we can all feel the after-effects of it. Perhaps for the first time in history, the entire world, is sensing the same type of energy — fear, helplessness, uncertainty, and hope.

Let’s turn this pandemic into an opportunity. To spread positivity. And treat nature — plants and animals with respect. We feed off their energy. We disseminate energy back to them. And the cycle repeats.

We’re all in this together.

It was probably January 2012. I saw this beautiful magazine cover photograph, and challenged myself to sketch it out. I took the help of my art teacher to get the facial proportions right and began working on the fabric. And then, somewhere down the line, I abandoned the sketch. I cannot recall why. I occasionally looked at it with disappointment. Over a year and a half later, I unearthed it from the depths of my cupboard.

I promised to spend a little time on it as often as possible. First the face, then the hair, then the finishing… It was test of my patience, and I almost lost it, as I quickly filled in the colours. And here it is, at long last, a former unfinished portrait, now complete. 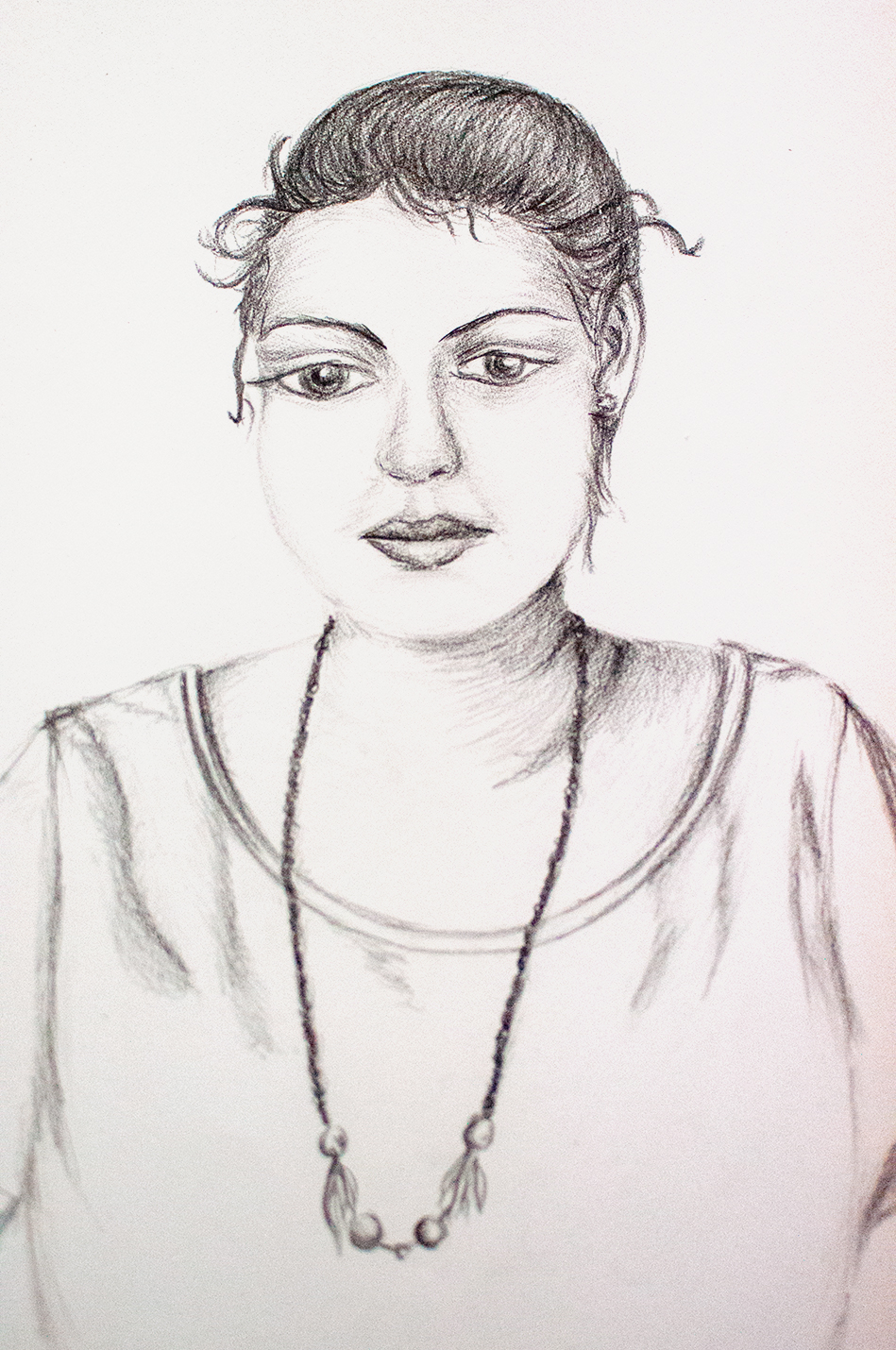