As promised yesterday, here’s the view we saw atop the Monsoon Palace, Udaipur, Rajasthan. 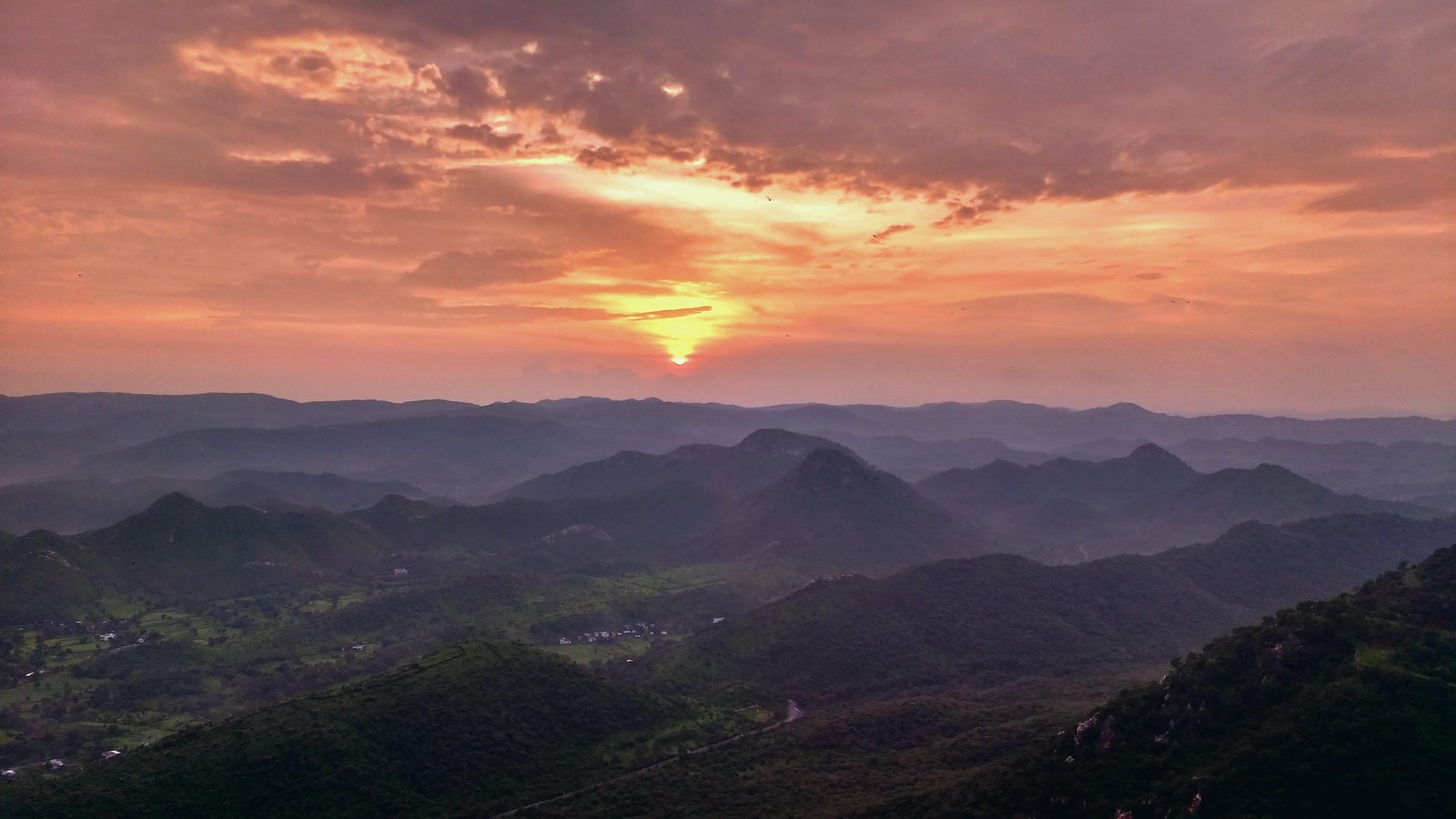 Like I said, neither my words, nor my pictures could do justice to what we saw. This must suffice for now.

This is post #5 in this year’s NaBloPoMo, or as Ra calls it Nano Poblano

Researching for our trip to Udaipur, we had heard and read about the amazing views of the Aravalli hills from the Monsoon Palace, especially at sunset. The Monsoon Palace was constructed specifically for the purposes of observing the monsoon clouds—and what better time to visit the Palace than in the monsoon!

It had poured heavily the day we reached Udaipur, and it appeared that the heavens above would deny us our visit to this Palace. Amazingly enough, the rain stopped in the early evening, and we headed out to catch the setting sun under a rather overcast sky.

From what we had read in the travel reviews, it was a long trek uphill, and not much upstairs, apart from a neglected building; that one must carry food and water, as there were no food stalls; and keep them safe as there were lots of monkeys who would snatch away your food. And so we went, fully prepared with snacks and water, tucked in a canvas bag, secured safely with the modern miracle called a zip.

It turns out, either this place hasn’t been reviewed by travellers for a while, or I ended up reading every old one!

So I’m going to attempt to set it right, by debunking all the myths (and adding one observation) about the Palace.

What each of the travel reviewers did get right, though, were the views. To quote one reviewer, “the views are to die for”.

Such was the breathtaking view of the Aravalli hills at sunset, that neither my words, nor my pictures could do justice to it.

We spent a couple of hours drenched in the golden hues of the sun, and as grateful as we were to be in presence of such magnificence, there was one greedy thought still lurking within, “if it weren’t so overcast!” Oh well. 🙂

So what were the great views, that captivated us, you ask? I’ll leave that hanging for one more day.

In the meanwhile, here’s a peek.

Photos taken with a Moto G3, edited with Image Composite Editor and Befunky. Click/tap to enter my Flickr Photostream

This is post #4 in this year’s NaBloPoMo, or as Ra calls it Nano Poblano

We’re in November! The year is fast ending. Now where did this year go? For those who know me, it’s been one heck of a roller coaster the past couple of years. And given all that’s going on right now, it would be madness to even think about participating in, what the blogosphere calls, the Nanos. So I’m not thinking about it. I’m jumping right in. If I can manage it, hurrah! And if I can’t, well, that’s okay too.

How about you? Are you going to blog every single day in the month of November? Are you planning to write a novel? Are you crazy enough to do both?! Let me know 🙂

I had previous written about our experience on the boat ride towards Sangam and the jolly boatman who thought we were out to steal his job! This is a picture of the boat on which we sailed. We reached Sangam—the confluence of the holy rivers Ganga, Yamuna and Saraswati—at Sunset, and it was breathtakingly beautiful!

It appears that I have several photos with curves in them ;). That makes this boat my third post for the weekly photo challenge! Check out my previous responses Lamps in the sun and On the road: Gangtok to Darjeeling

This is post #1 in this year’s NaBloPoMo, or as Ra calls it Nano Poblano

I wanted to write about the stereotypical portrayal of Rajasthan – a traditionally attired instrumentalist, strumming his Ravanhatta and playing Raag Maand and perhaps the most popular, and misinterpreted Rajasthani folk song “Kesariya Balam”. But I’ll shut up this one time, and sit with the Rajput royals and look out for the monsoon clouds atop Sajjangarh in Udaipur.

In response to the Daily Post’s Weekly Photo Challenge: Layered – explore the interplay of texture and depth.